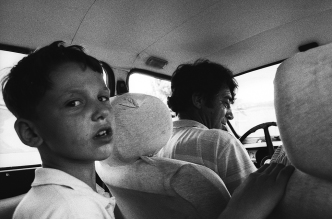 "This project deeply surprised to me at many levels. First of all, it was my first approach to the work of Gilles and I must confess he is a very good photographer, then all the concept arround this project is very well thinked. This is a classical docummentary project on Romenia about the village of Tichilesti, this was the place were Romanian authorities send all the people with leper. Gilles was on this village in two different periods and now he presents two different publications to the same porject, this is one of my favorite parts of the project, the relation between this two separate moments." Sept 2017 / The unknownbooks /  Lire l'intégralité de l'article

" The work entitled "Zona de Alb" (two volumes published a few years later) and which has received many awards is a delicate and painful way of documenting a community's daily life, avoiding the traps of a pain representation.Wich exist, however, is the result of the direct documentation of social cutting, rather than clinical.

To the residents of Tichileşti Mercier intended to return dignity to an uprooted, forgotten community but in which lepers still engage in social relationships, living isolation as an opportunity to overturn the prejudices they are victims of and move in full freedom.

Gilles Mercier, as has been said, and it is good to repeat it, does not seek our compassion, but wants to testify how within a perimeter of our humanity there are forgotten corners, dark areas, scattered by fear. But the protagonists of "Zona de Alb" are men who are not projections of our prejudices and the photos are there to remind us. And as far as "downloaded" in the vicinity of Nothing, there will never be a place so far away from which they can not hear their voices. So, thanks to the sensitive work of Gilles Mercier, we now know their forgotten faces."